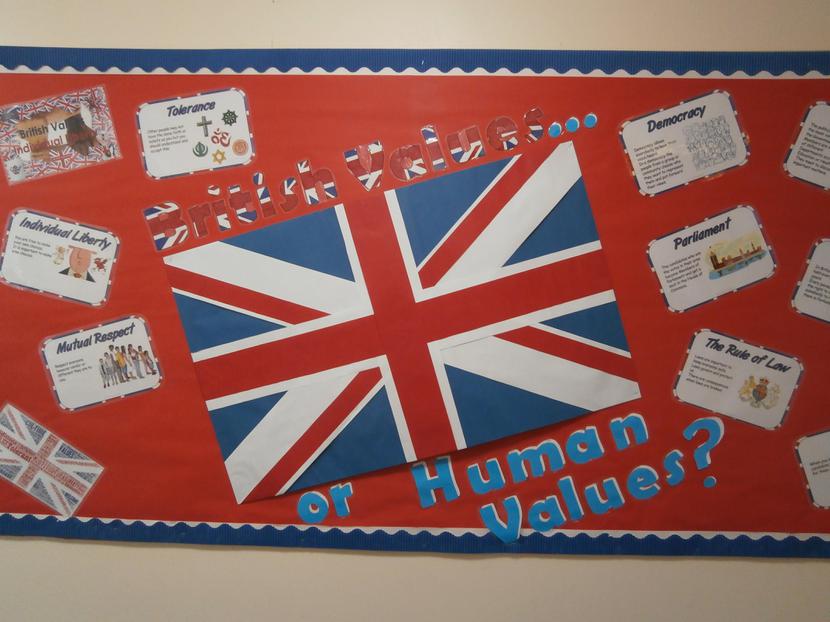 The DfE have reinforced the need “to create and enforce a clear and rigorous expectation on all schools to promote the fundamental British values of democracy, the rule of law, individual liberty and mutual respect and tolerance of those with different faiths and beliefs.” Further, how well a school promotes such values is an aspect of Ofsted’s inspection process.

The Government set out its definition of British values in the 2011 Prevent Strategy, and these values were reiterated in 2014. Read the government’s  Prevent duty guidance and its guidance for schools and our Northwick Manor Primary School Prevent leaflet at the end of the page.

The term ‘British values’ might be slightly misleading in that these values are integral to so many countries throughout the world – they differ in no way from the values of most western European countries.

At Northwick Manor Primary School we uphold and teach pupils about British Values which are defined as:

These values are taught explicitly through Personal, Social, Health and Emotional (PSHE), and Religious Education (RE). We also teach British Values through planning and delivering a broad and balanced curriculum. We have achieved the following external accreditations which demonstrate evidence of our commitment to British Values:

Ofsted grade of ‘Good' with some Outstanding features (September 2014)

The schools values are complimentary to British Values:

THE SEVEN R’s: reflectiveness, risk taking, readiness to learn, responsibility, resourcefulness, relationships and resilience. These are complimented by our

At Northwick Manor Primary School, these values are reinforced regularly and in the following ways:

Democracy is an important value at our school. Pupils have the opportunity to have their voices heard through our School Council and Echo Committee. We also have a Head Boy, Head Girl, Deputy Head Boy, Deputy Head Girl and Curriculum Monitors The election of all these representatives is decided by pupil votes.

Children have an annual questionnaire with which they are able to put forward their views about the school.

Pupils have opportunities for debating, making decisions and contributions about and on their learning and Think Five Rewards (in year 6). Year 5 learn all about democracies as part of their Ancient Greece topic.

Our Raising our Game half termly theme promotes British Values and each half term we have a new focus, e.g. responsibility, relationships. At the end of half term we hold an assembly on the theme and all children have to show evidence of it in practise through reflection of their actions.

The Rule of Law:

The importance of laws and values, whether they are those that govern the class, the school or the country, are consistently reinforced throughout regular school days. Our system for behaviour is aligned to an agreed set of expectations.

Pupils are taught the value and reasons behind laws, that they govern and protect us, the responsibilities that this involves and the consequences when laws are broken. Initially pupils learn about the need for rules through games and team working.

Visits from authorities such as the police, fire service etc. form part of our calendar and help reinforce this message.

To encourage and promote good behaviour, attitude and work, we have devised a reward and sanctions system which is consistently followed throughout the school.

We are committed to praising children’s efforts. Children are rewarded not only for achievement in curriculum areas, but for demonstrating expected behaviours.

Children’s achievements are also recognised during our weekly Congratulations Assemblies.

Individual Liberty :
Pupils are actively encouraged to make choices and take risks at our school, knowing that they are in a safe and supportive environment. We support pupils to develop their self-knowledge, self-esteem and self-confidence. We encourage pupils to take responsibility for their behaviour, as well as knowing their rights. We have a strong anti-bullying culture and a set of procedures to follow should a bullying incident occur.As a school we provide boundaries for our children to make choices and take risks safely, through the provision of a safe environment and planned curriculum. We challenge stereotyping when necessary.Pupils are encouraged to know, understand and exercise their rights and personal freedoms and are advised how to exercise these safely, for example through our e-Safety and PSHE teaching. Whether it be through their choice of learning, of how they record, of participation in our numerous extra-curricular clubs and opportunities, pupils are given the freedom to make choices.

Mutual respect is at the heart of our values. Children learn that their behaviours have an effect on their own rights and those of others. All members of the school community treat each other with respect.

Part of our school ethos and behaviour policy are based around core values such as ‘respect’ and ‘responsibility’ and these values determine how we live as a community at Northwick Manor Primary School.  Collective Worship is based on a set of good life long values which are central to how we expect everyone to go about their life at our school. We discuss differences between people, such as differences of faith, ethnicity, disability and differences of family situations, such as looked-after children or young carers.

Fundraising, trips and charitable events and our curriculum enable pupils to explore and understand the lives of others.

Tolerance of Those of Different Faiths and Beliefs:

This is achieved through enhancing pupils’ understanding of their place in a culturally diverse society and world.

We study other world faiths and learn about their customs, practises and celebrations. Members of different faiths or religions are encouraged to share their knowledge to enhance learning within classes and the school.

At Northwick Manor we will actively challenge pupils, staff or parents expressing opinions contrary to fundamental British Values, including ‘extremist’ views. All staff have had ‘Prevent’ training.

Collective Worship and discussions involving prejudices and prejudice-based bullying have been followed and supported by learning in RE and PSHE.

Unfortunately not the ones with chocolate chips.

Some cookies are necessary in order to make this website function correctly. These are set by default and whilst you can block or delete them by changing your browser settings, some functionality such as being able to log in to the website will not work if you do this. The necessary cookies set on this website are as follows:

Cookies that are not necessary to make the website work, but which enable additional functionality, can also be set. By default these cookies are disabled, but you can choose to enable them below: